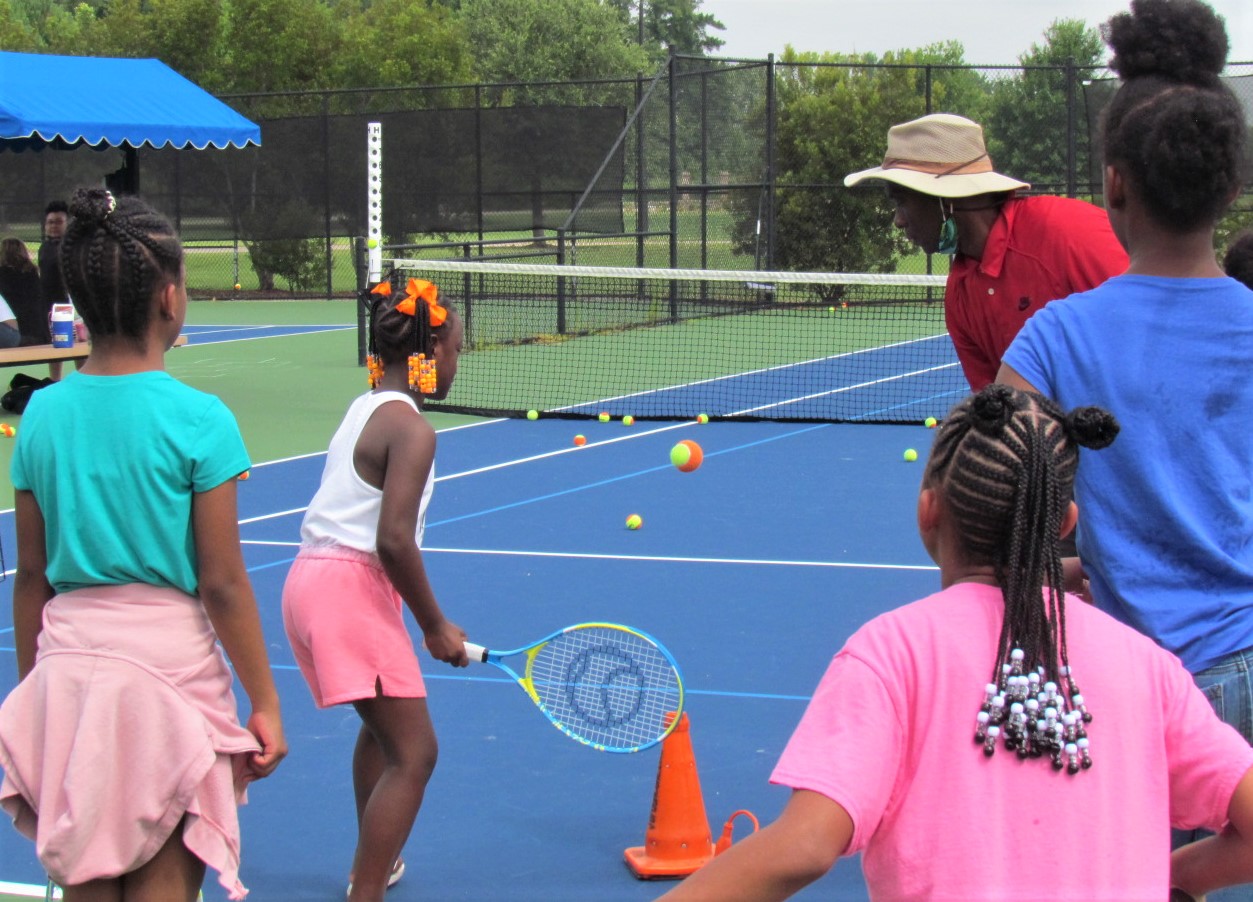 The Ron James Youth Tennis Program just completed its first summer sessions at the Dr. Eddie Floyd Florence Tennis Center. Last Thursday, youngsters from the Boys and Girls Clubs of the Pee Dee wrapped up an eight-week session with pizza, cookies and Gatorade, and this Thursday a group from Girls University completed a ten-week session, also with a pizza party. Twenty-three participants from the Boys and Girls Clubs and 41 from Girls University took part, and many of them promised to come back after school starts when the RJYTP shifts to after-school sessions.

These first sessions, which included clinics on Tuesday and Thursday mornings, covered the basics of tennis strokes and the rules and etiquette of the game.  When after-school sessions begin in August, the veterans will move on to match play while newcomers start with the basics.  Over time, each participant will be encouraged to progress at his or her own pace.  The goal, said Coach Mike Gee, “is to give these young people a healthy, completely enjoyable, socially-oriented sport that can last a lifetime.”  Coach Fred Davis added that he hopes to see many of them in a few years playing for or against his Wilson High School squads.

These initial participants be joined by youngsters from the City of Florence After-School Centers as soon as the City lifts Covid restrictions on the use of buses.  Organizers plan to eventually offer the program to other youth-serving organizations, including schools and churches.

The Ron James Program, a member of the United States Tennis Association National Junior Tennis and Learning (NJTL) network, is designed to bring the health, fitness, and sportsmanship benefits of tennis into the lives of children who would not normally have access to the sport.  It works closely with its partner organizations, the City Athletics and Sports Tourism Department, the Boys and Girls Clubs, Girls University, the City After-School Program, and the Florence Tennis Center to integrate on-court activities and learning opportunities—with the goal of helping young people reach their personal objectives and live more rewarding lives.

Funded initially by generous local donors and by grants from the South Carolina Tennis Patrons Foundation, the USTA Foundation, the USTA Southern Section, and the Florence Tennis Association (FTA), the program is currently managed by the FTA Board, which assures its sustainability and enables it to solicit donations as a non-profit organization.  However, plans call for making the program a separate non-profit with its own community-based Board of Directors within two years.  Former FTA and state tennis association presidents Ernie James and Paul Pittman stressed that bringing tennis into the lives of children is one of the best things anyone can do for the future of our community, and a program like this that grows out of the community is the best way to go about it.

The program is named in honor of educator, coach, and tennis professional Ronald Avan James, who died unexpectedly in 2019.  When asked about Ron James, Coach Courtney Timmons said that she was proud to work with the RJYTP because Coach James was her “personal role model and mentor, just as he was for so many others.”

The FTA is an award-winning all-volunteer non-profit organization that works to grow the game of tennis in the greater Florence area by conducting leagues, clinics, tournaments, and other activities and working with area governments and businesses to make certain that first-rate tennis facilities are available to the public.