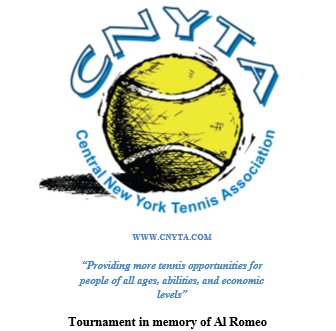 The entry form can be downloaded here.

One Singles event per person

Gifts for all players!

after noon on Thursday, Sept.9th

or on-line via Tennislink

*Open adult tournament is sanctioned by the USTA.  You must be a member to participate.

HOURS OF         Must be available Friday after

penalty system will be in effect.

A 7 point tiebreaker will be used

after 6 games each in all sets

and a 10 point tiebreaker in lieu

of a third set.  Tournament

committee has final decision on

the division of all players.

In Memory of Al Romeo

For decades, Al Romeo was a guiding force for the game of tennis in Central New York. His legacy is the thousands of tennis players who were introduced to it by this genial gentleman. Throughout his career, he provided programs for young players, clinics for teachers and introduced the sport of tennis to many elementary schools throughout the Central New York area.