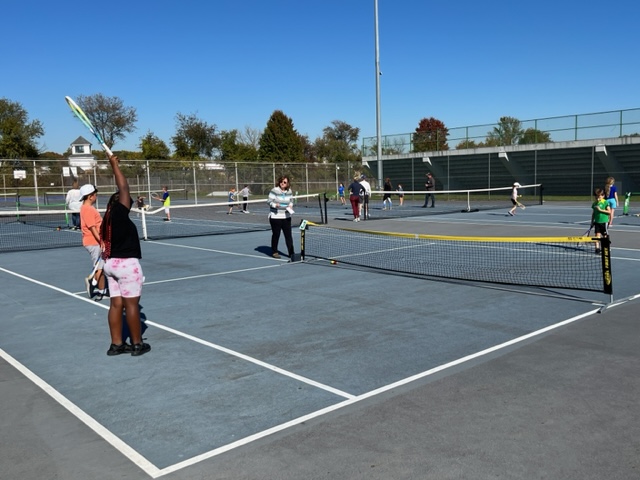 The 2022 Fall Team Tennis Challenge, held at the tennis courts of Council Rock North High School in Newtown, drew over 60 competitors, who brought along plenty of family and friends support.

Match play was divided into three age/skill divisions: Little Aces, Juniors, and Teens/Adults. In the Little Aces and Juniors divisions, every individual point accumulated toward the team’s total score. A bonus round involving a group tennis game gave each team a chance to jump ahead and added plenty of motivation to the competition.  Similarly, in the Teens/Adults division, every game (using tennis no-ad scoring) counted as a point toward the total team score.

The athletes in all divisions were divided into Northern Bucks and Southern Bucks, and the teams were comprised primarily of athletes who practiced at BCTA locations in those regions.  Teams selected their own names in the youth divisions, and all teams played multiple rounds, competing with various teammates and against various opponents.

The Little Aces division competed on 36-foot courts with red balls and produced some great rallies among the players. The Eagles jumped into the lead after the first two rounds and were able to  maintain  their margin throughout the competition—sealing their Gold Medal victory by winning the  Tennis Sandwich Team relay bonus.

The Juniors played on 78-foot courts with green balls, and before the bonus round, the Unbeatables led, 317–290. The Cardinals had an opportunity to snatch victory in the 30-point bonus round, but true to its name, the Unbeatables held off the Cardinal’s challenge by winning the Team Singles bonus game and going home with Gold Medals and a 347–290 victory.

Midway through the Teens/Adults division, which competed on 78-foot courts with yellow balls, the Southern Bucks Black team led, 37–24. While the Northern Bucks Red Team rallied in the second half, the Southern team stepped up to the challenge to hold onto a 73–60 Gold Medal victory.

“The energy level and enthusiasm was high all day,” said BCTA program director Laura Canfield. “All were great sports!” The participants were thrilled with their medals and sportsman awards of various tennis merchandise, and most important, enjoyed friendly competition and met fellow tennis players.

Many thanks to the BCTA Coaches throughout the county—especially Craig Batten, Tim Donney, and Steve Johnson, who assisted with the Fall Team Challenge—and volunteers, and particularly, a big thanks to the volunteer parents who helped with scoring the matches.