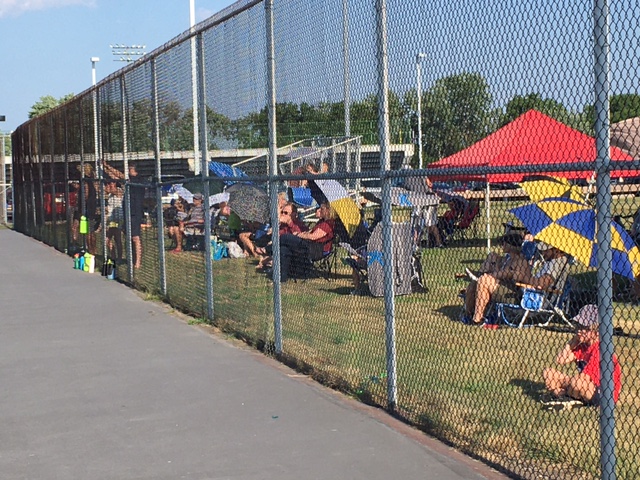 The July 22–24 weekend of the National Public Parks Tennis Championships (NPPTC)— hosted by the Bucks County Tennis Association (BCTA), Inc., and supported by the Bucks County Tourism Grant Program—was one of great tennis on various levels, and a “hot” ticket both in attendance and weather. Courtsides were quickly turned into beach scenes with tents and umbrellas popping up to stave off the sun!

Friday evening, just under 90 county participants of BCTA public park tennis programs gathered at Council Rock North High School to compete in a fun team challenge that enabled them to test their tennis prowess against their peers. Some of the athletes enjoyed their first competitive tennis experience that night.

The three-day event attracted over 350 junior and adult players and tennis enthusiasts from the surrounding area and as far away as Minneapolis, Baltimore, and Atlanta—and all were invited, with their guests, to a Player Picnic/Reception held in the historic Tyler Formal Gardens on the Newtown campus of the community college in conjunction with Open Aire Affairs. The picnic included a short program that featured Billie Jean King's acceptance of the 2022 Eugene L. Scott Renaissance Award as well as remembering Carol White, a former local tennis player, coach, and volunteer whose family started a BCTA Scholarship in her name. A doubles division in the NPPTC was named after her, and a portion of the championship proceeds was donated in her memory. The BCTA also recognized the accomplished participants of its Joseph J. Canfield Youth Leadership Program.

Leading up to this historic weekend (as this is the first time the NPPTC was held in the Philadelphia area since 1926 and its first appearance since COVID cancellations in 2020 and 2021) were plenty of promotional activities. The BCTA reproduced the “Original 9” tennis exhibit  a recreation of the International Tennis Hall of Fame exhibit that honored the nine women who risked their reputations to start the women’s professional tennis tour. The exhibit has been on display in the Linksz Pavilion on the Newtown Campus of Bucks County Community College. The BCTA also created the Bucks County Tennis Trail that sent tennis enthusiasts to BCTA-programmed public park tennis courts for selfies that could earn them a free NPPTC T-shirt and other tennis merchandise as well as two tickets to the US Open in New York City.

“What a great weekend of tennis,” BCTA Program Director Laura Canfield enthused. “The high heat index did nothing to stifle the quality of tennis or the enthusiasm of the players